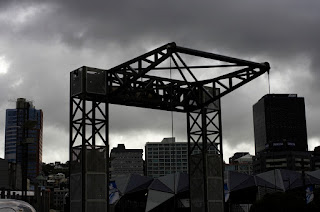 I will post more photos, but not too many

The numbers were down tonight compared to the first few weeks of the race, and that is probably due to the weather. A cold southerly which I detected did strengthen as the day went on probably put some people off, except the hardy. But a stiff southerly is usually better than a gale force northerly although some may disagree.

Tonight in the women’s race we had two decisive sub-20 minute performances.

The first result was from Miranda Spencer who was first home in the grade and 22nd overall. Not bad for her first ever outing on this course. Her time of  19.36 was 6 seconds head of a chasing Abby Miller who came home in 19.42 for 2nd place. This was Abby's third race on the waterfront and each has been comfortably below 20 minutes.

Back further in 3rd was Bex Hutchinson who ran 21.13 which I believe is a PB.

In the men’s race the speedy Ben Twyman ran a terrific 15.40 his 2nd sub-16 minute performance in 2 weeks and a PB to boot.

Andrew Wharton also turned in a great performance with a 15.57 for silver.

Back in 3rd and just not quite cracking 16 minutes was Thomas Strawbridge the Trentham United junior who ran 16.01 which was a massive PB by 33 seconds.

I will be watching to see if Thomas can get over the 16 minute mark because he looks really fit at the moment.

Given these times it will be interesting to see what can be achieved at the track 10,000 race scheduled for Newtown Park in a few weeks.

Observations:
Josh Jordon, fresh from a Parkrun win in Balclutha last week, ran his 2nd best time on the waterfront course tonight and only 4 seconds behind Will Critchlow. Will might need to watch out.

Posted by rowang at 7:52 PM No comments: