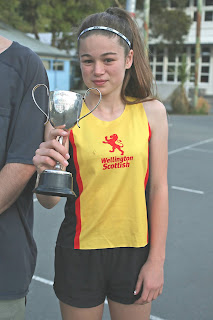 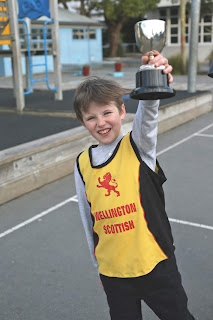 It was a beautiful day in Eastbourne for this event with a number of trophies up for grabs.

The Novice Cup is up for grabs to those Scottish members who have never won a trophy before. The Galashiels is a very old club trophy and is for everyone not eligible for the Novice Cup. The Cole Land Cup is a walking trophy and there are a couple of trophies for the kids, one for the boys and one for the girls.

A traffic diversion in Petone resulted in a delayed start but that really did not spoil anything.

What did spoil the day was that disappearance of the secret Harry Potter portal on the bush track.  Worst of all there are no photos from the Nikon because of a card writing error. I did get a few with Canon.

At the business end the course is roughly the same as the one 40 years ago except runners don’t need to cross the road to run on the sand and under the jetty wharf on the return journey.

It’s a tough wee course especially when you hit the track going up into the bush. No wonder the fast off road specialists stayed away.

But Dave Hatfield turned up to make sure that nobody nicked his race record set all those decades ago.

First through the bush, just before the before the sharp turn to the left up the track to the road, was Andrena Patterson and last through as the backmarker was Michael Wray. The video above shows all of this.

Posted by rowang at 9:29 AM No comments: